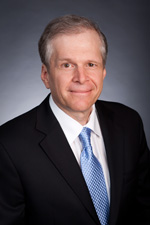 Paul A. Traficante founded Greco Traficante Schulz & Brick in 1986 along with his partner Clyde C. Greco, Jr. He is AV® Rated by Martindale Hubbel. Paul has been practicing law in San Diego, California, for more than twenty-three years representing design professionals, developers, general contractors, and subcontractors in a wide range of construction disputes including claims for bodily injury, property damage, and delay damages. Mr. Traficante has also represented a variety of individuals and business entities in tort claims ranging from slip and fall accidents to complex personal injury litigation.

Mr. Traficante was born in Bologna, Italy. He received a Bachelor of Arts, with honors, in 1977 from the State University of New York at Stony Brook. After college, he attended the University of San Diego School of Law where he received his Juris Doctorate, Cum Laude, in 1980. He was a member of the San Diego Law Review and Authored "People v. Drew, Will California's New Insanity Test Ensure A More Accurate Determination of Insanity," 17 San Diego Law Review 491, 1980. In 1987, he attended the Hastings College of Trial Advocacy. Paul was admitted to the California bar in 1980, and is also admitted to practice before the U.S. District Court for the Southern District of California. In one notable case, Mr. Traficante represented the City of San Diego in litigation against the designers and manufactures of the defective sleeve valves installed at the Point Loma Wastewater Treatment Facility. Paul obtained a very favorable settlement for the City, including, among other things, the complete removal and replacement of those valves at no expense to the City. Mr. Traficante was also lead attorney in the defense of Leisure Technology, Inc., a NYSE real estate developer sued by the Ocean Hills Homeowners Association. The Ocean Hills litigation was one of the largest construction defect cases ever filed in the State of California, and involved more than 100 parties and a $120 million dollar demand.

Mr. Traficante's practice also includes representation of insurers and insureds in coverage and indemnity litigation, and a wide range of professional E&O claims, including attorneys and pharmacists. Mr. Traficante is an approved Arbitrator for the American Arbitration Association.